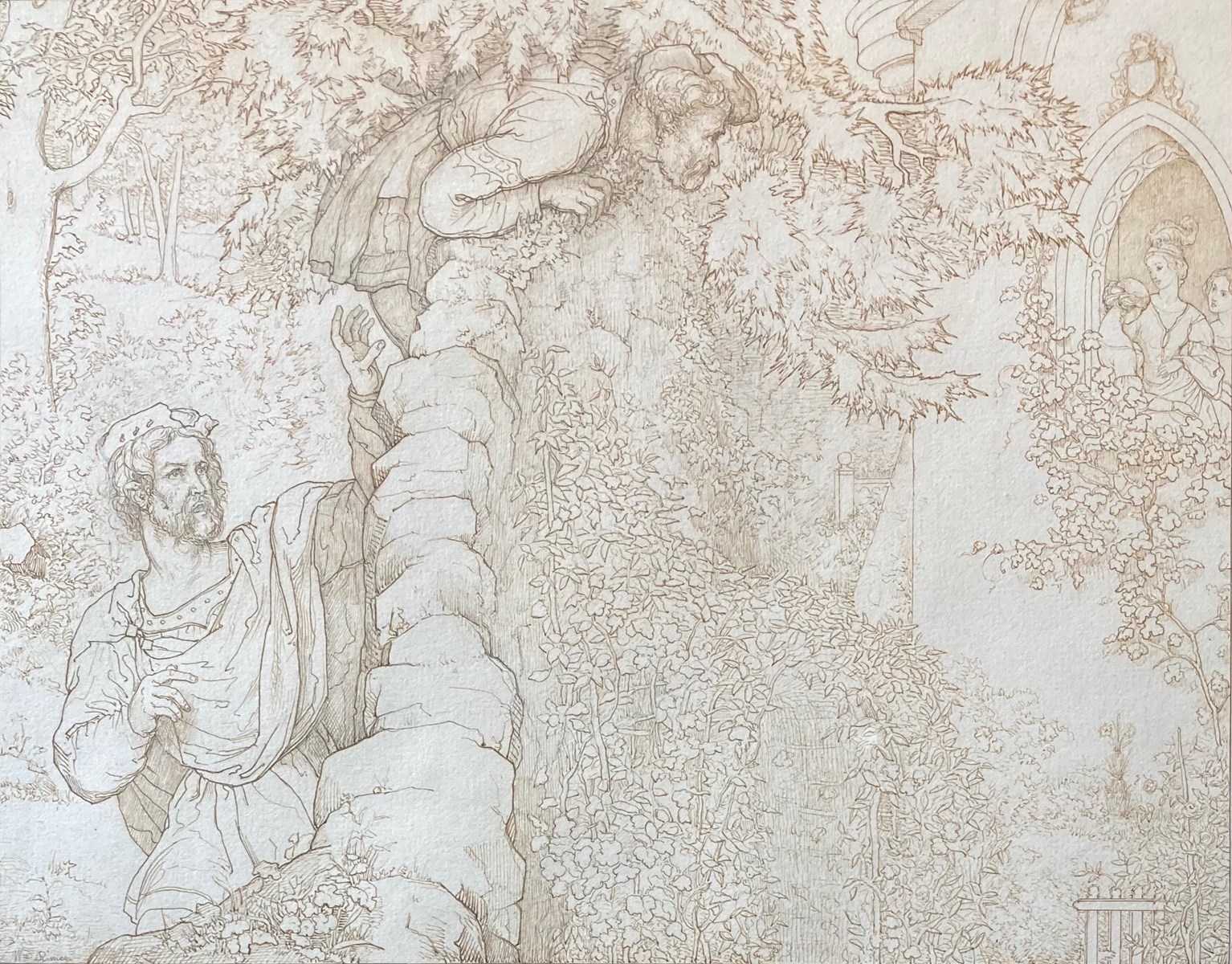 FOR thus it chanced one morn when all the court,
Green-suited, but with plumes that mock’d the may.
Had been, their wont, a-maying and return’d. That Modred still in green, all ear and eye. Climb’d to the high top of the garden-wall To spy some secret scandal if he might,
And saw the Queen who sat betwixt her best
Enid, and lissome Vivien, of her court
The wiliest and the worst ; and more than this
He saw not, for Sir Lancelot passing by
Spied where he couch’d, and as the gardener’s hand
Picks from the colewort a green caterpillar.
So from the high wall and the flowering grove Of grasses Lancelot pluck’d him by the heel,
And cast him as a worm upon the way.

As both a painter of historical scenes and an illustrator of books, William Rimer was an artist very much of his time. The subject matter of his paintings are typically Romantic, from Children Playing in a private collection, to a reproduction of Joshua Reynolds’ Fortune Teller at Knole in Kent. In stylistic terms, Rimer’s outline drawings show the influence of the German tradition, popularised by Moritz Retzsch and the artists of the Nazarene School.

In 1844 Rimer won the Art Union of London’s illustration competition with designs for James Thomson’s poem, The Castle of Indolence. Rimer’s winning designs were engraved and finally published in 1847. A complete set of these prints can be seen in the collection of the British Museum, London. Rimer entered the competition again in 1863 with designs for Alfred, Lord Tennyson’s Idylls of the King. The twelve poems of the cycle, which recount King Arthur’s efforts to create the perfect kingdom, are accompanied by twelve illustrations. One of these original designs, Merlin and Vivien, is in the British Museum. A second drawing from Rimer’s entry sold at Rosebery’s in 2004 and the third known illustration is presented here. The drawing depicts Sir Lancelot’s discovery of the traiterous Mordred spying on Lady Guinevere. As in the poem, Lancelot raises his arm to “[pluck] him by the heel, And cast him as a worm upon the way”.